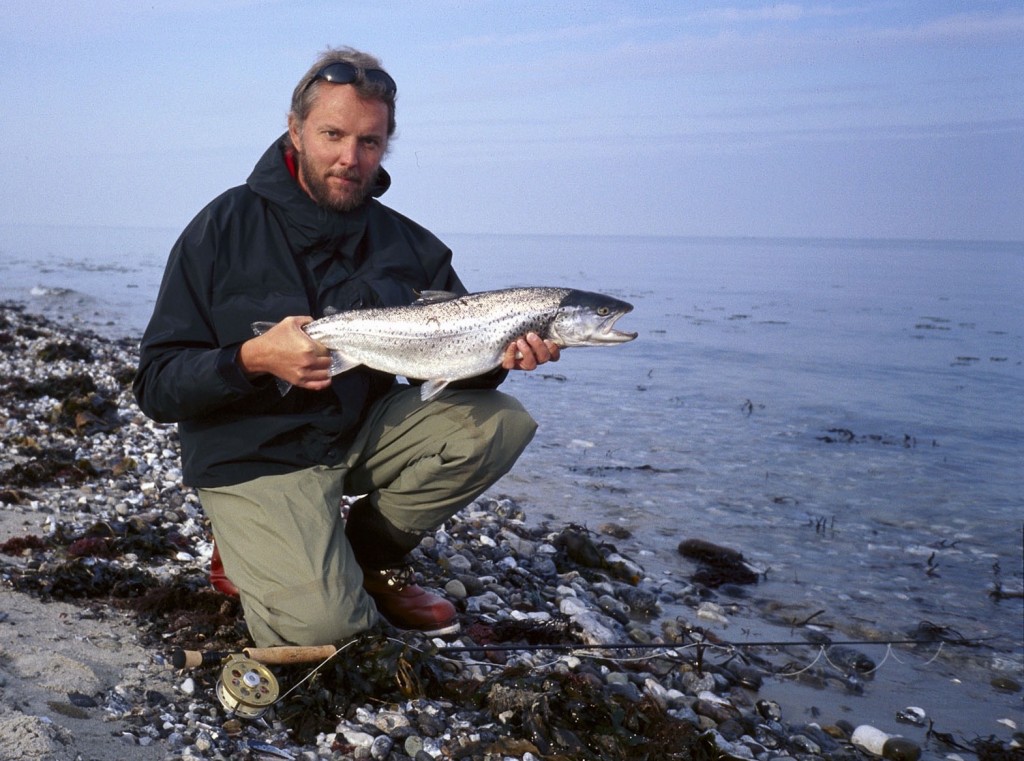 April is the month when the first salmon traditionally move up the River Guden in East Jutland after a long and nourishing stay in the great larder of the North Atlantic.

They may even have been as far as the Davis Strait between Greenland and Canada. They may have been en route for two or three years, which means a few extra kilos in the luggage by the time they return home!

These “Easter salmon” lure salmon fishermen to rivers like the River Guden year after year – maybe to a visit to the classical salmon pools near Frisenvold. However, most of them are severely disappointed, which is a real confirmation of the meaning of “April Fools”!

The first May flies of the year – the fly-fisher’s “Large Dark Olives” and the Baëtis rhodani of the entomologist – typically hatch on warm days in April. This becomes the first surface meal of the year for the trout and grayling of the river – the latter in its spawning season and consequently preserved.

So now is the time to get the first dry flies out of the fly box. Old steadies that have been there for years, and which may have been given a touch-up over a steaming kettle in the kitchen. Or completely fresh ones that were tied during the long winter evenings. Flies that have fed the imagination of the dry fly angler, who by now has had to do without the river for months.

April is also the month when perch, heavy with roe, arrive at the spawning grounds. Here they spawn in long chains on the water plants, which will later provide good protection to the young, unless the tenant of the lake wants to thin out the stock. If so, he may have thrown a number of rice vases or old Christmas trees into the water and anchored them there.

The lake perch finds such artificial spawning grounds absolutely enticing and will immediately spawn there – almost to order – with the desired result that the tenant of the lake can then pull the roe-covered rice vases or Christmas trees out of the water again.

The long-billed garfish typically arrives towards the end of April. The first ones are always the biggest – about a metre long and as thick as a wrist before the breeding that will really do something to the weight they gained during their winter stay in the North Sea.

Along the coast, the silvery sea trout is truly in its element. Those that were breeding in winter are gradually regaining their lost weight. At any rate, the water temperature is now so high that the fish can hunt actively all day. And the water is now full of all kinds of small fry, crustaceans and bristle worms.

And the sea trout that have spent the winter in the rivers or the brackish fjords can now move out to more open and salty water. Here in April there is a massive movement of sea trout from many closed fjord areas to the open coastal areas, where the fish will later spread out all through the summer.

Out here on the open coast they can stuff themselves with the shoals of sand eel, sprat and herring. In no time they can grow much bigger than they would have been able to do in the fjords, where the majority of the feed is made up of sticklebacks, gobies, shrimps and sand-hoppers.

The coastal waters now have a temperature that really suits the cod and it can be seen very close to the shore, where it hunts for its favourite food – crunchy crabs. The best time for spotting it is the hours just before and just after sunset.