Made entirely from Flashabou, this synthetic Danish saltwater fly has taken fish and fishermen by storm. Read the story about the Christmas Tree – “Juletræet” in Danish – which I invented back in the early 1980’s.

– It’s not a fly, it’s a lure, some say. Well, if flies are tied of hair, fur and feather, then it is definitely not a fly. But who cares as long as it catches fish. And this one does!

The Christmas Tree can be tied in various ways but the basic pearl pattern looks like this:

As shown in the drawing below by my good friend from Sweden, editor of “Flugfiske i Norden” magazine, Gunnar Johnson – tail, body and hackle is made from one and the same material: A single piece of mylar tubing which is split for the tail, covers the chenille underbody and again is split and folded back as a false hackle. Here’s how to tie a Christmas Tree in three simple steps. You can’t go wrong: 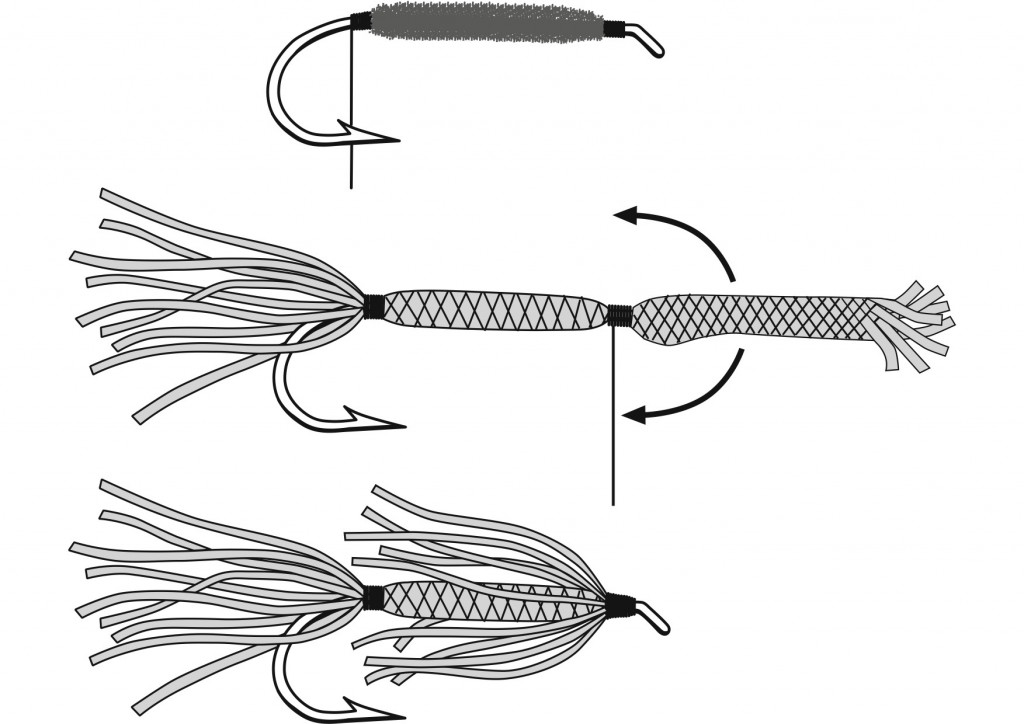 When you see commercially tied Christmas Trees, they are invariably tied the wrong way. To save money they are rarely tied on stainless hooks but on lighter bronzed hooks that rust quickly in saltwater. To cut time and expenses, the chenille underbody is often left out resulting in a very light fly that does not sink easily. Finally, they are often tied with non-fluorescent thread…

So, if you want to make sure that you get the right thing, you have to tie them youself!

Just like the Muddler, “Juletraet” is a fly type, not merely a pattern. It is basically always tied in the same way, but colours can be changed according to whim and conditions. Personal favourites of this creator is pearl (the original and most versatile), silver (for large versions), hot fluorescent pink (for winter and cold water) and fluorescent green (for night time fishing where it can be charged).

I have tied and tried any number of other colours and they all catch fish under some kind of condition. Bright silver is great for fresh run salmon as is brown for coffee shrimp eating bonefish. But the four colours mentioned above have become my personal standbys for Danish sea trout fishing as they are very good producers under a wide variety of varying conditions. 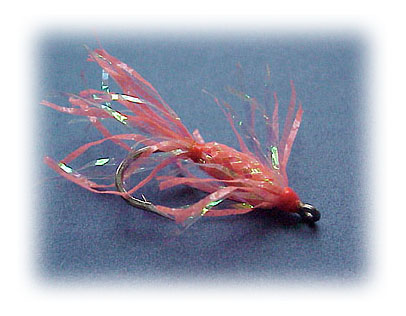 The Christmas Tree is a simplistic but very efficient fly that has caught thousands of trout and sea trout in many parts of the world – Patagonia and Tierra del Fuego included. Thus I scored a Patagonia Grand Slam catching a brown trout, a rainbow trout and a brook trout in one day using a pearl Christmas Tree.

Not to mention the steelheads up to 20 lbs. that I caught on it in British Columbia. Or the 9 lbs. brown trout that took it in a mountain lake in Iceland a few summers ago. Or the 6 lbs. brook trout that engulfed it in Labrador. Or the record 15 lbs. Zambezi River tigerfish that swallowed it in Africa. And so on.

Finally, I have fond memories of my otherwise very proficient Cuban guide who initially looked at my upside down pearly Christmas Tree with utmost disgust. – Too flashy for Cuban waters! was his only remark.

Well, some 40 beautiful bonefish later he had changed his mind forever about the Danish Christmas Tree. Next day he even suggested I put it on my leader instead of the traditional Crazy Charlies… 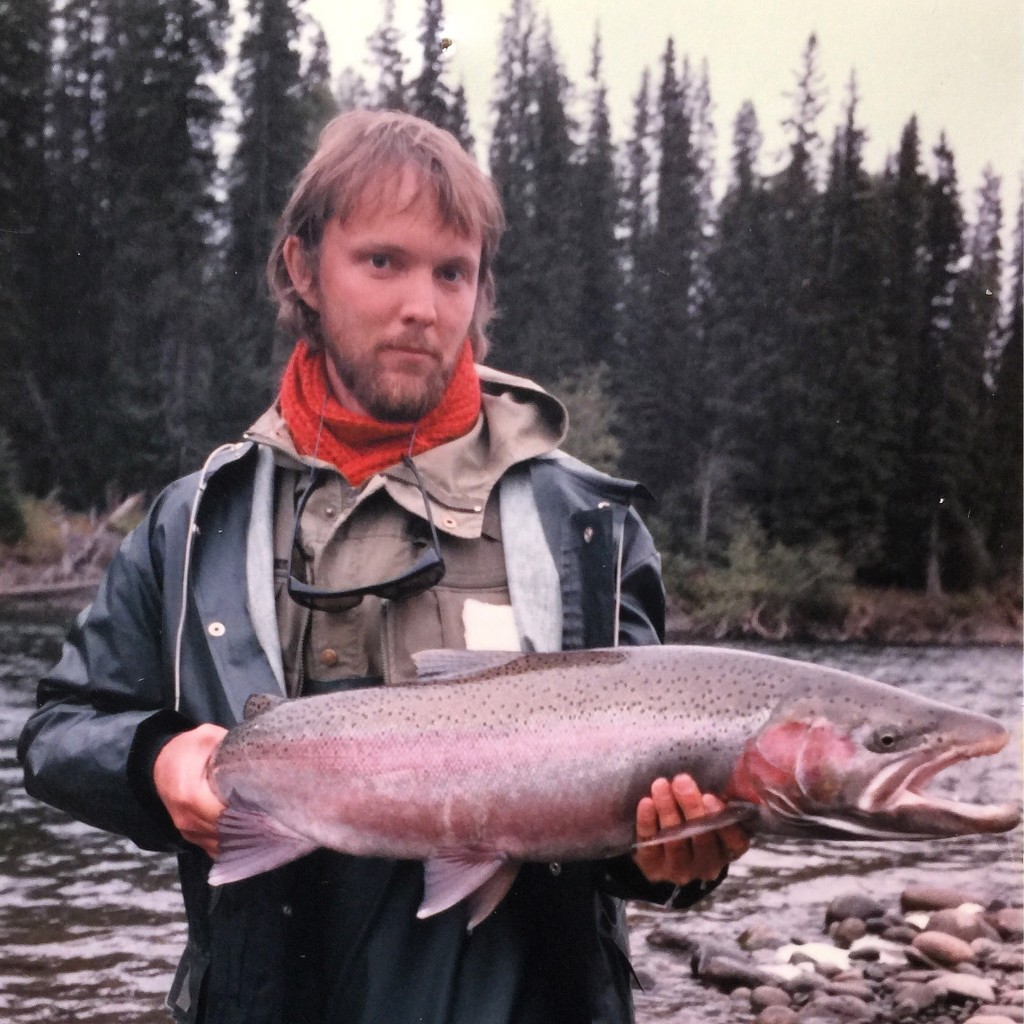 The list of victories is endless and you shouldn’t go fishing without a good supply of freshly tied Christmas Trees in your fly box! Especially not if you intend to fish for salty sea trout in Danish waters… 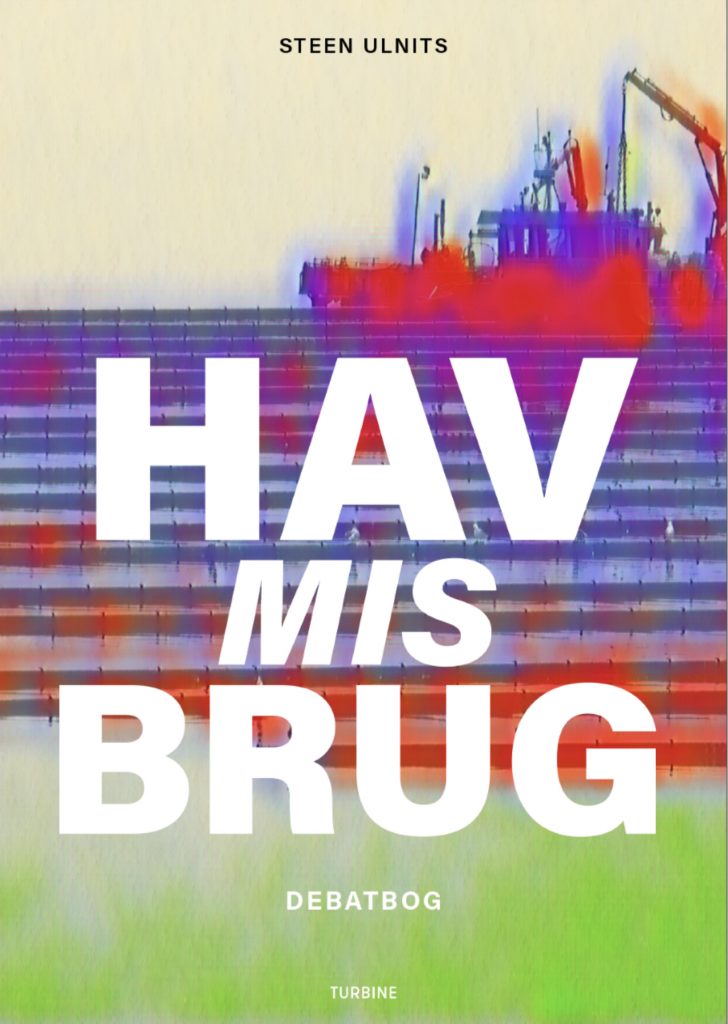