Even for an experienced fisherman it can be difficult to predict where seatrout may be found at a given time. They may be here, there – and nowhere – at the same time.

A novice fisherman should therefore be prepared to invest a certain amount of time – in reconnaisance and study – before he starts catching fish!

Several external factors rule the life of a seatrout. Knowledge of these factors will highly increase the catches of any fisherman, be he a spinning addict or a flyfishing fanatic. Two of the most important factors are food and the physical condition of the water. Where food can be found, seatrout will be present too! After all, food is the primary reason for the trout migrating into the sea.

For that reason it is very important that visiting fishermen keep an eye open for food items present in the piece of water that he has chosen to fish. If he sees fleeing baitfish, hiding crustaceans or wiggling worms, he is on the right track. Then sooner or later seatrout will be there too. But if he sees nothing, chances are that there will be no seatrout either.

If you want to catch seatrout on a regular basis, you have to know about their annual migrations and changing habitats. Seatrout migrate a lot – most along open shorelines, least in secluded bays. They are either following bait or migrating back and forth between their spawning and their feeding grounds.

In early spring the spring migration begins – from freshwater or brackish water into the open sea. The exact time for this migration depends on both the time of year, the location and the prevailing water temperature.

If the winter is mild or the water brackish, the migration from the rivers and secluded bays may begin early in the year. But after a cold winter or in places with a high salinity, migration will begin later – typically in March-April. And if spring sets in suddenly, migrations may start – and end – very quickly. Following a mild winter, migrations will start more slowly and will last longer. 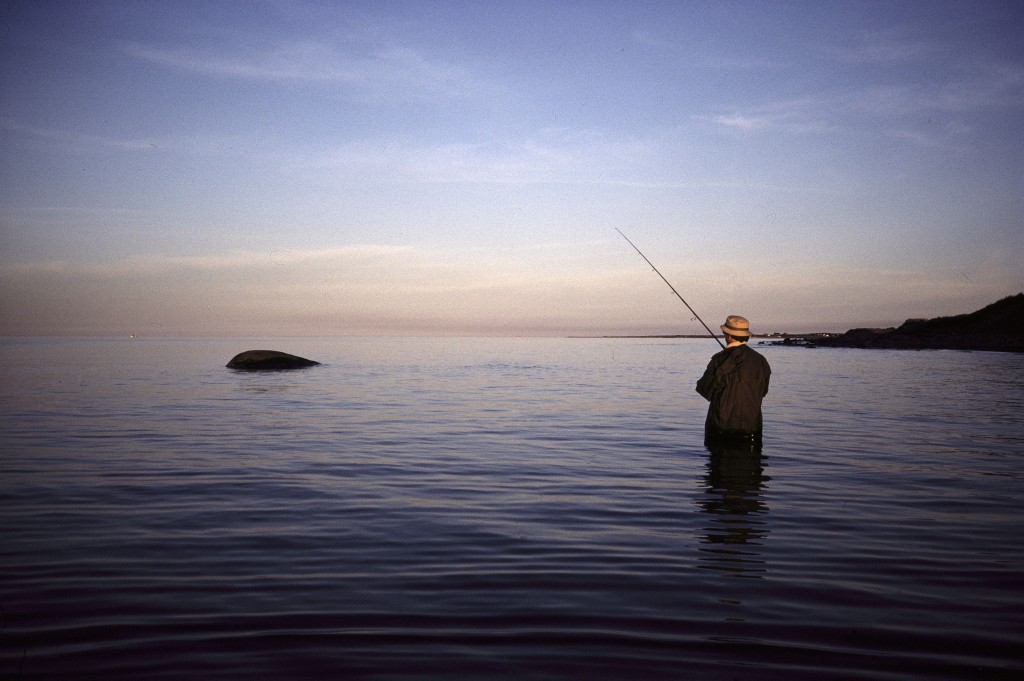 If the winter has been long and cold – with ice covering the water – you may experience fantastic fishing just after iceout. A large number of fish will have congregated in the brackish bays, where they are very hungry. And since food is still scarce, the fish are easy to catch. Conversely, after a mild winter fish will be spread over a larger area – many in the open sea at an early time. Here they are more difficult to locate – and catch.

After spawning seatrout quickly regain the weight they lost in freshwater. Often the spawned-out “kelts” are followed by a different kind of seatrout – the small but fat and silvery “grønlændere” who are immature seatrout that have not spawned yet. Unfortunately, they are often just under the legal size limit of 40 cm’s and thus have to be returned unharmed.

“Grønlændere” may never have entered freshwater during the winter months. They may have stayed in brackish water all winter where they have been feeding actively. Come spring they follow the bigger seatrout out into the open sea where they feed voraciously on baitfish, crustaceans and worms.

When the water temperature rises, so does the seatrout’s tolerance towards the salinity of the water. During the warm summer months the seatrout has no problems whatsoever with true oceanic water – with a salt content as high as 35 o/oo.

But water temperature can get too high for seatrout. When it approaches 20 degrees Celsius, seatrout escape the heat by migrating out towards deeper and colder water. This typically happens in July which marks the coming of true summer. May and June still offer excellent seatrout fishing for those willing to fish through the night – during the “light nights” as we call them in Denmark.

But the warm coastal waters of summer still hold an abundance of food. Seatrout know that and seek the shallows at night time when the water is at its coldest and prey most active. Come sunrise, seatrout again abandon the shallows and seek the cold of deeper water.

If you want to catch seatrout during the heat of summer, it has to take place during the darkest hours of the night. If you have access to a boat, you can seek the fish in deeper water during the day. Unfortunately, seatrout out here are often digesting the food they ate during the night. Thus they are not very interested in eating any more – until after the next sunset. 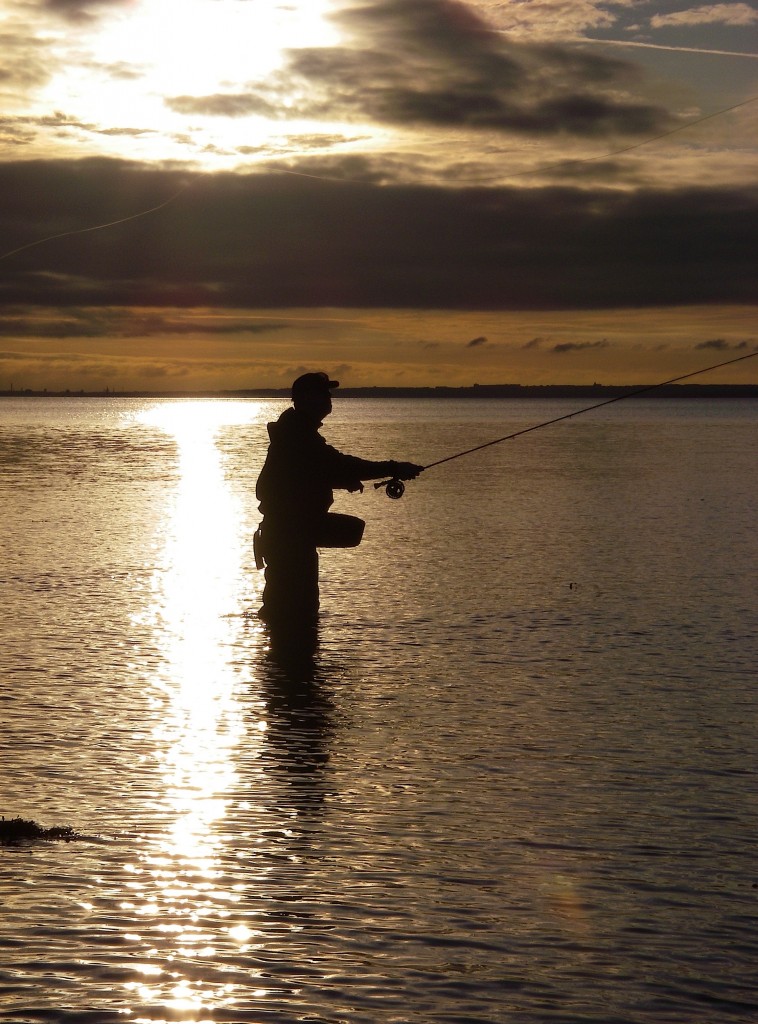 Daytime fishing can still be productive though – at places where strong currents and deep water meet within reach close to shore.

Spring and summer have been used to grow fat and ready for the spawning migration of autumn. This migration is often triggered by the first storms and rainfalls of August-September. Immediately the fish sense that autumn is around the corner – spawning season too.

Most of the larger fish have already left the sea and entered the rivers in May-June. The majority of smaller fish stay in the salt for an additional few months and do not start the spawning migration until now.

Often they congregate in smaller schools of similar sized fish. Some males and females may already have teamed up in pairs. If you meet groups of mature seatrout like these, you may be in for the best and most exciting fishing of the year!

Don’t be afraid of inclement weather when it comes to fishing for these lightly coloured fish. In fact the fishing typically improves as the weather gets worse. Calm and sunny weather usually makes these fish almost impossible to catch. But inclement weather really turns them on!

Often these mature fish of autumn can be caught in exactly the same spots where the spawned-out kelts of spring were encountered. And often it pays to fish during night time where migrations mostly take place.

Points projecting from the coastline are always the best bet. Here the fish often stop for a break during their migration.

Come winter, all mature seatrout have left the salt and entered the rivers. Still you may encounter small immature “grønlændere” or large “overspringere” – fish that for some reason have chosen not to spawn that particular year – in the ocean. The latter form sort of a reserve if some diasaster should wipe out all fish in the river. 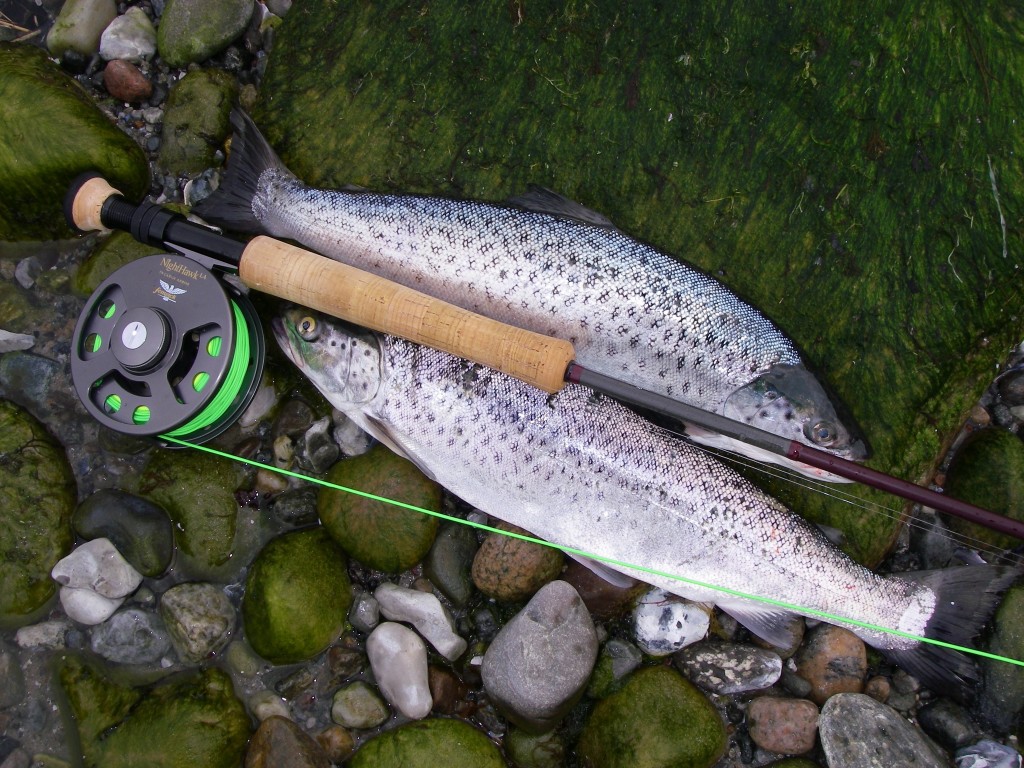 These silvery and immature fish continue their nonstop feeding in the salt as long as the water is warm enough and the food plenty enough. As the water temperature drops, the fish seek from the salty open sea into secluded bays where freshwater outlets have made the water more brackish. Here they will spend the winter. They are still feeding but their appetite drops with the dropping water temperature. Thus they become more difficult to catch.

It is very difficult to generalize about the effects of water temperature on fish behaviour. This is especially so when the salinity of the water has to be taken into account too. But if we are to do it anyway, then always and if possible avoid temperatures below 5 degrees. If the water temperature is somewhere in between 5 and 15 degrees Celsius, seatrout thrive – no matter how high the salinity.

In the wintertime, open and salty waters are usually devoid of seatrout. They have either left to spawn in the rivers, or they have sought more brackish water in the bottom of secluded bays. This is where we find them when winter is giving way to spring – after iceout. From then on their appetite just grows and grows, often resulting in pure feeding frenzies on warm sunny days.

Not surprisingly the best early spring fishing is usually to be had on sunny days where the water really has picked up some warming rays from the sun. Shallow water normally produces most fish as it warms faster than deeper water.

When the upcoming spring migration has spread the seatrout over a larger area, they have again become more difficult to find – and catch. But they still hunt aggressively – if you encounter them. And come the heat of summer, the places used for overwintering have often become muddy and depleted of oxygen – now totally unattractive to the fish.

The year of the seatrout has come to an end – and a new has begun!

In larger bay areas you may come across a type of seatrout that does not follow the Year of the Seatrout. It is the so-called “fjordørred” – “bay trout” – which resides permanently in the bay all year round. Quite often it never turns silvery like most seatrout. Instead it retains a golden hue with lots of black spots all year round. 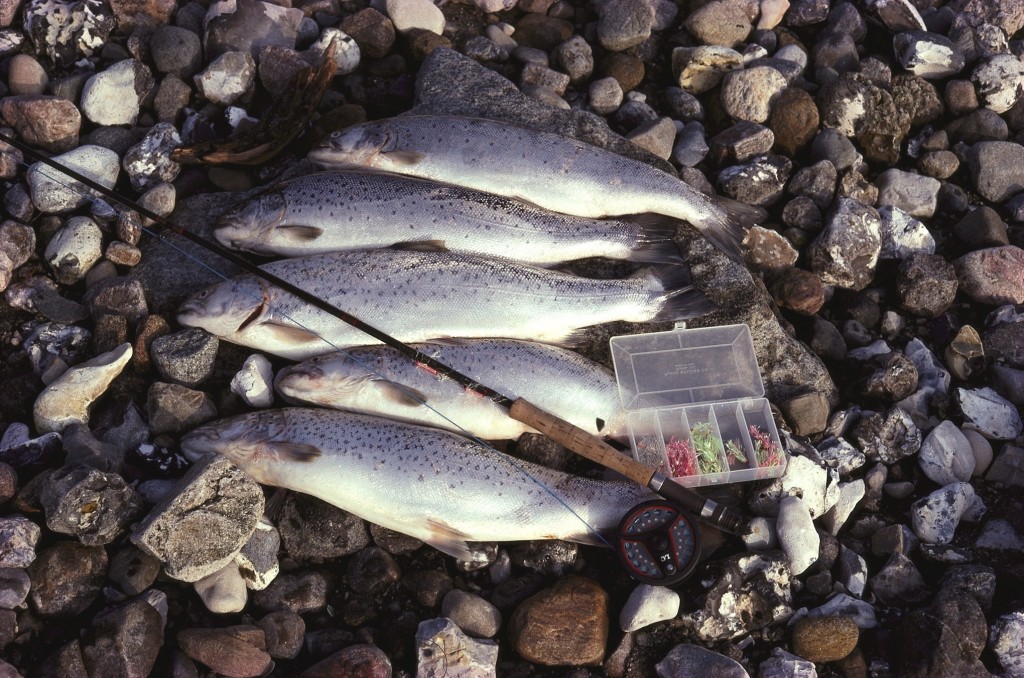 Occasionally you may even encounter a bay trout with remaining red spots – a leftover from its time in freshwater. A good example of the fact that seatrout and brown trout are in fact one and the same species – they just happen to live in different environments. Bay trout feed mostly on smaller baitfish and crustaceans – only rarely do they attack larger fish.

The exact opposite goes for the so-called “sildeædere” – “herring feeders” – who do just that: Feed exclusively on large herring and sprat. They may have the same parents as the bay trout but at some time in life they decided for a different way of living.

When reaching a size of maybe 3-4 pounds, small food items don’t really fill up the stomachs of seatrout any longer. Therefore they turn their interest towards larger food items.

They migrate out into deeper water where they lock on to schools of sprat, herring and sand eels. On this new diet the seatrout start to grow very rapidly. They have also become fish that shoreline fishermen seldom encounter any more. They live way out and deep down where only boat fishermen stand a chance of catching them.

But they grow rapidly and reach sizes comparable to salmon. Seatrout weighing 10-20 pounds are not unusual among the schools of sprat, herring and sand eels! 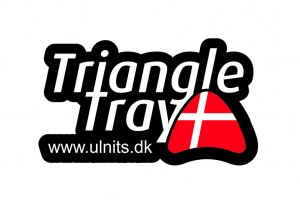